When I discovered the Stigma, a kind of sign on my forehead, telling I am person that has been abused, is damaged, done – in some way. . . When I discovered this feeling, I put it away as being irrational and not connected to reality. „Nobody sees it, and I am worth as much as anyone else“.

Well. Now and then, life reminded me of the fact, that some people are able to sense my damages and weaknesses, and can be tempted to use them. Which is kind of „normal“; you find manipulative people everywhere, and I know how to defend myself.

The feeling of being „different“ remains, though. Strangely, it was a book which is generally supposed to explain us why Trump became president, that shed light on all these confused but persistent feelings, and made clearer to me what they mean: Quite a lot, actually. It’s not a good idea to try to push them aside and dismiss them as „irrational“. On the contrary. And the problem is neither the „sexual“ aspect of the violence (of which this blog is talking), nor the shame. The real problem consists in the enormous difficulties to trust whomever, and to insert into structures, in which trust is the key currency. For traumatized people, trusting someone is a challenge comparable to that of a bumbler wanting to talk. What is evident and easy for the others, costs us a lot of reflection, strategic thinking and – effort. Again and again.  END_OF_DOCUMENT_TOKEN_TO_BE_REPLACED

I don’t wish you a merry Christmas, but a tolerable one. Well, why not merry – in the sense that it doesn’t trigger bad memories, of the time you spent it in your families as defenceless children at the mercy of transgressive adults.

I do like Christmas, and what I celebrate is the fact, that we human beings are able to bring completely defenceless creature into this world, and capable of loving, protecting and accompagnying them into their adult life. Let us fight for good conditions for parents and children, and for our right to be sometimes weak, but still safe.

I thank you for your time and attention, the comments and the reading. I don’t know why Miles Davis did this rebellious Christmas song – he had a sheltered maybe even happy childhood. END_OF_DOCUMENT_TOKEN_TO_BE_REPLACED

I was naive enough to think or hope that Date Rape doesn’t exist any more. An article on a German website taught me otherwise:

Of course it was completely naive to think that a culture of consense and a positive, reponsible attitude towards sexuality – the own and other’s – should now be prevalent at least among younger people.

On the one side, the attitude towards sexuality is very much a cultural thing, and so quite complex. On the other side: There are rules. Very simple ones. „No means no“ for example. But that’s not good enough. The rule to follow is: „Yes means yes“ (and nothing else means yes: Not passivity, or not saying no). I cite Jaclyn Friedman in the introduction to the very interesting collection of essays „Yes means yes“: END_OF_DOCUMENT_TOKEN_TO_BE_REPLACED

I just finished my last book, „a fisherman of the inland sea“ by Ursula K. Le Guin (loved it), so what now? I’m happy to discover this initiative via „the Gloria Sirens Blog“! It sounds like a lot of inspiration and exchange. So I’m looking forward to discover the color purple by Alice Walker. Hopefully with some time for exchange also. . .

. .. attitude towards sexuality. Watching this film left me nearly breathless. Never seen such a drastic description of the consequences that total lack of respect towards sexuality and lack of communication about it can have. And this coming from puritan US!! I was stunned. „Homesman“ is not a film about the „Wild West“ or about a tough woman, but (for me) about a desolate and desolating culture that destroys relationship between men an women, the women and at the end also life. The film shows this without any teaching attitude, you don’t even notice what it is about until – well, probably until you try to understand why the brave Mary kills herself. Not because she finally picked the wrong man for this one night? She’s not sixteen any more. . . Difficult to tell why, at the end. But we who watch understand how desperate the situation of these people was; and not only, not mainly because of their hard lives. But mainly because their relationship to each other was spoiled by violence and the lack of compassion, and a completely rigid, mean moral. No pleasure allowed, no birth control either. One of the mad women has thrown the child born from a rape by her husband into the sump. There is not enough to eat anyway.

Let me put it this way: I have rarely seen such a subtle way of showing such an enormous deal of violence.

Sister of the well known human rights activist Raif Badawi, Samar is „a strong voice“ as Hillary Clinton said when Badawi got the „International Woman of Courage Award“. She fought for driving licences for women in Saudi-Arabia e.g. Samar Badawi was put in jail already 2008 – for having fled her sexual abuser (in this case her father). He had incriminated her for „disobedience against parents“. Yeah well, the victims are the ones who get punished; that’s not new (and not specific to Saudi-Arabia).

After a police questioning the day before yesterday, she is free again. „Free“ physically at least. By the way: Here is the twitter address of King Salman of Saudi-Arabia: @KingSalman

But who knows – asking massively for freedom for her and her brother might even worsen things.

Le Guin has no fear of speaking about sexual violence – it is not an important subject in her work, but it exists in a very natural way, she doesn’t exclude the subject, knowing it can be part of human existence. One of her short stories is about a society where a horribly mistreated child is the core of its happiness and its good functioning.

It is being showed – naked in a cellar room, suffering, horribly lonesome – to every person on the edge of adulthood. Le Guin doesn’t tell explicitly why this is done and how it works that the Scapegoat makes everyone conscious of the luck and good life he or she has in comparison.

There are persons though, who leave the country sooner or later because of the existence of this child (once one dies, another one is incarcerated). They can’t accept the fact that a society builds on such a horrid base. One of her stories is about one of the persons who left. 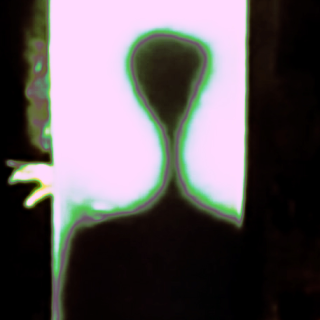